Serse Coppi (19 March 1923 – 29 June 1951) was an Italian professional road racing cyclist born in Castellania. He was the younger brother of Italian cyclist Fausto Coppi. His greatest victory was 1949 Paris–Roubaix, when he was placed equal winner with André Mahé after controversy. He died in 1951 after crashing in the final sprint of the Giro del Piemonte, when his wheel was caught in the tracks of the Turin tramway. He was 28.

HIS SIGNATURE IS EXTREMELY RARE! It is here on a card together with other members of the Binachi Squadra of 1947:

He rode in the 2020 Tour de France for the first time, becoming the overall winner and also securing the young rider and mountain classification.He is the first Slovenian winner and with the age of 21 he became the second youngest winner after Henri Cornet's win in 1904.

(3 February 1920 in Borgerhout – 1 October 1956 in Antwerp) was a Belgian professional racing cyclist.

He was runner-up in the Tour de France in 1950 and 1952, and the best sprinter in that race in 1955 and 1956. In 1955 he won the Classic "Ardennes double" by winning La Flèche Wallonne and the Liège–Bastogne–Liège in the same year.. He also won the World Cycling Championship that year.

Stan Ockers died after crashing during a track race in Antwerp in 1956. A year later a monument was built in Les Forges, Sprimont, in the south of Belgium.

Henri Garnier was a professional racing driver from 1933 to 1937. In his first professional year he was second in the Tour of Belgium. In 1936 he was able to win a stage and the Tour de Suisse after having finished second in the previous year. In 1937 he again won a stage in the Swiss national tour. In the same year he ended his career at the age of 29. In 2003 Garnier died in his adopted home in France at the age of 94.

is a Colombian cyclist, who rides for UCI WorldTeam Team Ineos.He won the 2019 Tour de Suisse and Tour de France, becoming the first Latin American winner of these races.

A Great Champion is dead!

Gimondi suffered a heart attack while swimming in Sicily.

After a late call-up, he won the 1965 Tour de France in his first season as a professional at just 22 years old. By winning the Giro d'Italia in 1967 and the Vuelta a Espana in 1968, he became the second cyclist after Jacques Anquetil to win all three Grand Tours. Gimondi won five Grand Tours in total, claiming further Giro titles in 1969 and 1976 before retiring in 1978.

He was also a prodigious classics rider, winning four 'monument' titles - cycling's oldest and most prestigious one-day races - including both Paris-Roubaix and Giro di Lombardia in 1966, before a second Lombardia title in 1973 and victory in Milan-San Remo the following year. Gimondi also won the 1973 world road championships in Barcelona.

was a Swiss cyclist. He was a specialist in six-day racing, winning a total of 33 events between 1956 and 1970, including 19 with Peter Post.

French cyclist born February 17, 1914 in Rocheville (Alpes-Maritimes). Magnificent climber, René Vietto moves the whole of France by sacrificing his chances during the 1934 Tour de France to help his leader, Antonin Magne . Winner of three stages in the Alps, he first repairs Antonin Magne, who had punctured in the Puymorens pass, by offering him his wheel. The next day, Antonin Magne falls in the descent of Portet-d'Aspet; Rene Vietto, left at the front, turns around, climbs the pass in the other direction and gives his machine to his leader. In 1939 are created the regional teams on the Tour. René Vietto is retained in the formation of South-East. Seeming to have found his superb, he seized the yellow jersey at the end of the fourth stage. He will keep his tunic of gold until the fifteenth stage. Finally, after experiencing a failure in the Izoard, he finished second in the Grand Loop, more than 30 minutes from Belgian Sylvère Maès.

René Vietto is the favorite of the first Tour de France after the war, in 1947. He seized the yellow jersey in the second leg, but, victim of a failure during the time trial against Vannes-Saint -Brieuc, he's mortgaging his chances. He will only take fifth place in this edition won by Jean Robic ahead of Pierre Brambilla. He ended his career in 1949.

In 1965 he became Britain's first world road race champion and won the Giro di Lombardia; this made him the BBC Sports Personality of the Year, the first cyclist to win the award. Injuries hampered much of Simpson's 1966 season. He won two stages of the 1967 Vuelta a España before he won the general classification of Paris–Nice that year.

In the thirteenth stage of the 1967 Tour de France, Simpson collapsed and died during the ascent of Mont Ventoux. He was 29 years old. The post-mortem examination found that he had mixed amphetamines and alcohol; this diuretic combination proved fatal when combined with the heat, the hard climb of the Ventoux and a stomach complaint. He is held in high esteem by many cyclists for his character and will to win.

Amberg was considered one of the strongest Swiss road drivers before the Second World War. He was twice Swiss road champion (1937, 1938), won in 1935 at Nice-St. Tropez and 1937 at the championship of Zurich. His greatest successes were the third place in the overall standings of the Tour de France in 1937 and at the UCI Road World Cup 1938.

After ending his career as a professional racing driver in 1947 Leo Amberg opened a cycling business. He is considered the discoverer of Hugo Koblet.

Robic found it hard to fit into an ordinary life when his career ended. He ran the family café but it failed, as did his marriage.

The first autographs of the Tour de France winner 2018 are available!

Leaving track cycling to focus solely on the road, he subsequently found success in both one-day/classic races such as the 2014 Commonwealth Games road race and the 2015 E3 Harelbeke, and in one week stage races, most notably at the 2016 Paris–Nice, the 2017 Tour of the Alps and the 2018 Critérium du Dauphiné.

In the Tour de France 2018, he gained the yellow jersey by winning stage 11, extended his lead by winning stage 12, and retained the lead for the remainder of the event. He became the first Welshman, and the third British cyclist after Wiggins and Froome, to win the Tour.

Printed and Hand-signed Autographs: NOT A FAKE FOR SURE

Jean-Pierre "Jempi" Monseré (8 September 1948 – 15 March 1971) was a Belgian road racing cyclist who died while champion of the world.  Monseré was a talented amateur who turned professional for Flandria in 1969. He won the Giro di Lombardia that year. A year later he became the Belgian track omnium champion and on 16 August 1970 he won the world championship in Leicester, England. He was the second-youngest world champion.

On 15 March 1971, Monseré was riding the Grote Jaarmarktprijs in Retie. On the road from Lille to Gierle he collided with a car driven on the course and died on the spot. A monument now stands at the spot. In a cruel twist of fate, in 1976 Monseré's seven-year-old son, Giovanni, died after a collision with a car, while riding his racing bike, given to him on his first communion by another world champion, Freddy Maertens.

Monseré’s autographs as a world champion are extremely rare as he just died about half a year after winning the title.

Costante Girardengo; 18 March 1893 - 9 February 1978) was an Italian professional road bicycle racer, considered by many to be one of the finest riders in the history of the sport. He was the first rider to be declared a "Campionissimo" or "champion of champions" by the Italian media and fans.

His career achievements include two wins in the Giro d'Italia, six wins in Milan–San Remo, three wins in the Giro di Lombardia; he was Italian road race champion on nine occasions. His professional career was extensive, lasting from 1912 to 1936 and was interrupted by World War I which robbed Girardengo of some of his best years. He was ranked number one in the World in 1919, 1922, 1923, 1925 and 1926.

At the height of his popularity in the 1920s he was said to be more popular than Mussolini and it was decreed that all express trains should stop in his home town Novi Ligure, an honour only normally awarded to heads of state.

Raphaël Géminiani (born Clermont-Ferrand, France, 12 June 1925) is a French former road bicycle racer. He had six podium finishes in the Grand Tours. His professional career ran from 1946 to 1960. He won the mountains competition in the Tour de France in 1951. His best overall place was second in 1951 behind Hugo Koblet. In 1955, Géminiani finished in the top 10 of the three big tours (Tour de France, Giro d'Italia and Vuelta a España), equalled by Gastone Nencini only in 1957.

This carefully autographed card together with the hand-written envelope shows the very professional way some of the former champions treated their fans!

Oscar Egg (2 March 1890 – 9 February 1961) was one of the first Swiss track and road bicycle champion. He captured the world hour record three times before the First World War and won major road races and stages of the Tour de France and Giro d'Italia. He was also a noted developer of racing bicycles and bicycle components including lugs and derailleurs.

This photo was taken at the Tour de France 1910! Egg was 20 years old and participated in the Independent Category finishing at position 26.

WHAT A BEAUTIFUL HANDWRITING!!!

I have two cards of the Team Thomann TOUR DE FRANCE CYCLISTE 1910. The second one is signed by all three members, but especially by Henry Pelissier, the later Tour de France winner! (1923) 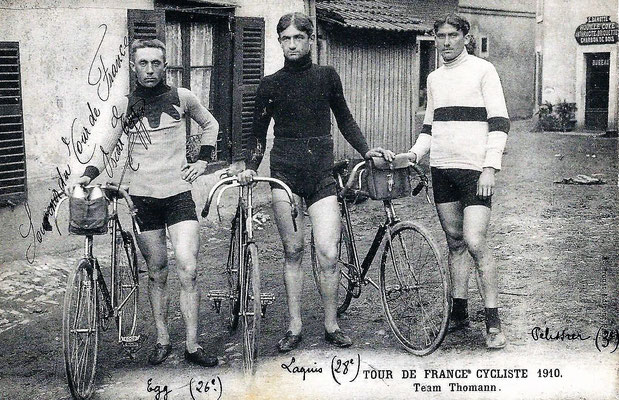 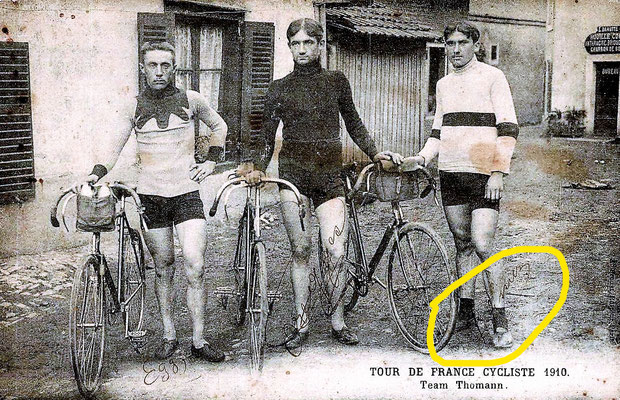 This very beautiful photo of Ottavio Bottecchia has been given to me by an Italian friend who lives in Pordenone, Bottechhia's place of residence.

After World War I  went to France in search of work. There he took up cycle racing and began to have good results. He returned to Italy and in 1923 rode the Giro as an independent rider. His fifth place (46 minutes behind winner Costante Girardengo) made him the highest placed independent.

He was recruited by French bike maker Automoto, which had ambitions of selling bikes in Italy. He rode the 1923 Tour de France as a domestique for winner Henry Pélissier. The next year he took the lead after winning the first stage and held the lead to the end. In he1925 he again won the Tour, though this time he rode more tactically and economically. After that, the winning magic seemed to have left him. He abandoned the 1926 Tour during a terrible, stormy stage.

He was found murdered on June 3, 1927. His skull was broken, but his bike was a short distance away, undamaged. There are many theories about his death, but no strong evidence points reliably to any explanation.

Winners of the Tour de France 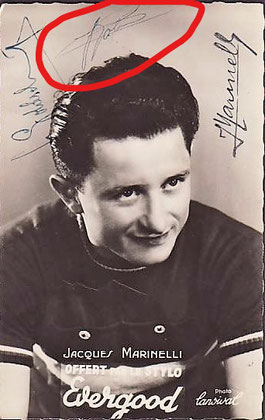 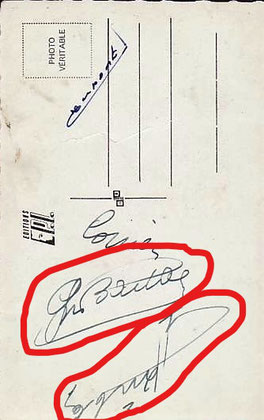 Jacques Marinelli, born December 15, 1925 at Blanc-Mesnil, is a French cyclist, yellow jersey on the Tour de France 1949 he finishes in 3rd place. Subsequently, he was mayor of Melun (Seine-et-Marne) from 1989 to 2002 and president of the Melun Val de Seine agglomeration community.

Albert Büchi belonged to the first guard of the Swiss professional racing drivers in the early 1930s.

In 1931 he was Swiss street champion and third in the championship of Zurich. In the same year he was third at the UCI Road World Championships in Copenhagen and ninth in the overall standings of the Tour de France. Büchi started the tour three more times. In 1932 he was 11th, 1933 13th and 1934 17th.

In 1933 he finished second in the overall standings of the first ever Tour de Suisse, with a gap of 9:01 minutes to the Austrian Max Bulla.

I found this very rare booklet in a bookstore, personally signed by the winner of  the Tour de France 1951. 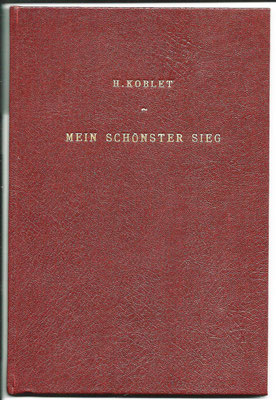 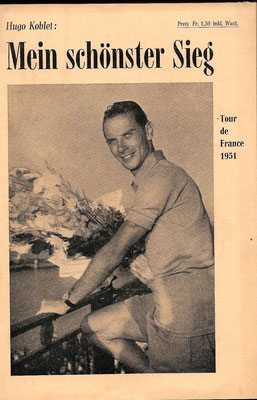