Hugo Koblet (born Zürich, Switzerland, 21 March 1925, died Egg, Switzerland, 6 November 1964[1]) was a Swiss champion cyclist. He won the Tour de France and the Giro d'Italia as well as competing in six-day and pursuit races on the track. He won 70 races as a professional.[2] He died in a car accident amid speculation that he had committed suicide.

Ferdinand "Ferdi" Kübler (born 24 July 1919) is a retired Swiss cyclist with over 400 professional victories, including the 1950 Tour de France and the 1951 World Road Race Championship.

Kubler's most successful years in international racing were 1950-1952, when the classics had resumed after the Second World War. He won the La Flèche Wallonne and Liège–Bastogne–Liège, both in 1951 and 1952. He was also World Road Race Champion in 1951, having placed second in 1949 and third in 1950.

Kubler was a high-spirited and impulsive rider sometimes given to strategically unwise attacks, out of exuberance and competitive drive. He was known as “the cowboy” because of his penchant for Stetson hats.

Gino Bartali, Cavaliere di Gran Croce OMRI (born Ponte a Ema, Florence, Italy, 18 July 1914, died Florence, 5 May 2000 was a war hero and a champion road cyclist. He was the most renowned Italian cyclist before the Second World War, having won the Giro d'Italia twice (in 1936 and 1937) and the Tour de France in 1938. His second and last Tour de France victory in 1948 gave him the largest gap between victories in the race. 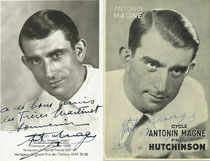 Louis 'Louison' Bobet (12 March 1925 - 13 March 1983 was a French professional road racing cyclist. He was the first great French rider of the post-war period and the first rider to win the Tour de France in three successive years, from 1953 to 1955.

Jacques Anquetil (8 January 1934 – 18 November 1987) was a French road racing cyclist and the first cyclist to win the Tour de France five times, in 1957 and from 1961 to 1964. He stated before the 1961 Tour that he would gain the yellow jersey on day one and wear it all through the tour, a tall order with two previous winners in the field—Charly Gaul and Federico Bahamontes—but he did just that.

His victories in stage races such as the Tour were built on an exceptional ability to ride alone against the clock in individual time trial stages, which lent him the name "Monsieur Chrono".